Every year, the International Institute for Management Development carries a comprehensive assessment of countries to establish their competitiveness. It bases the analysis on four main pillars that include economic performance, infrastructure, and business efficiency, and government efficiency. The results of this year evaluation saw Hong Kong emerge number one ahead of other 63 countries in the entry. Here is a caption of the top ten countries; 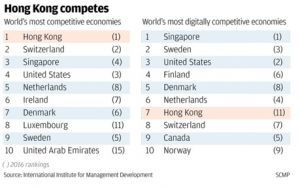 Hong Kong emerged top ahead of the main rivals, Singapore and Switzerland that have been changing the top position for years. Hong Kong was catapulted to the top mainly by two key indicators; Business efficiency and government efficiency.

This performance is a culmination of many years of effort by the administration to help businesses establish and succeed in Hong Kong. Chan Mo-po, the Hong Kong financial secretary, argued that the ranking was an indicator of international recognition of the robust financial and business systems. These are systems buttressed everywhere from policy to every day running of businesses.

Chan continued to the point that the global competition was becoming more intense and Hong Kong has to work extra hard in maintaining higher competitiveness and efficiency in all areas. Over the last couple of years, countries such as Netherlands and UAE have shot up and are improving their systems rapidly to also take up the first position.

Since 2013, Hong Kong has remained in the top three positions with exception of 2014 when the Institute ranked it 4th. The same great performance was also replicated in the Asian region.

Hong Kong performance in the region was magnificent as it climbed 7 places to reach position 18 in business and government efficiency improvement and dedication to international trade. This demonstrates the holistic principle of supporting foreign investments in the country for years.

Areas that Hong Kong did not fair very well

Besides, Hong Kong also faired dismally in the International Institute for Management Development alternative index, the digital competitive economies. This is the ability of a country to explore and take digital technologies to transform businesses and government operations. It slid to position 7 after losing to Sweden, Singapore, and the United States.

This dismal performance in digital competitiveness and the two indicators in the most competitive economies are considered to place the country in a precarious position. Chong Tai-Leung from the Chinese University pointed that Hong Kong could easily lose its competitive edge if it does not urgently look at the underlying factors for the dismal show in these indicators. In particular, he argued that it must act on the political climate and cost of doing business. Clearly, having a company secretary in Hong-kong is a must to develop his business.